Shaft 12, built in Bauhaus style, was opened in 1932 and is known as an architectural and technical masterpiece, with a reputation as the most beautiful coal mine in the world.

Schacht Albert Vögler, was designed by the architects Fritz Schupp and Martin Kremmer and was recognised for its simple, functional Bauhaus design with its mainly cubical buildings made of reinforced concrete and steel trusses. The shaft's characteristic Doppelbock winding tower became the archetype of many later central mining facilities and a symbol for the German heavy industry.

For the year 2010 Thomas Kellner announces the implementation of projects and ideas, whose artistic results can already be described as extremely interesting and challenging. The central motif of a new series of photographs is the so called Doppelbock, the shaft head frame, of the central shaft 12 on the grounds of the mine with the name Zeche Zollverein in the north of the city of Essen.

With this project Thomas Kellner takes the European Capital of Culture of the year 2010 in his extensive oeuvre. And he also pays homage to the city of Essen as an important city for the European history of culture and industry. In the course of time the red shaft tower, whose sturdy steel construction is securely connected to the earth, became the symbol of the mine with the name Zeche Zollverein, of the city of Essen and the entire region.

Thomas Kellner works deconstructs the tower in individual fragments, disintegrates them and paste them back together in a complete new object. The relationship of the German artist to a material like steel can also be seen in older works like "Eiffel Tower" or "Golden Gate Bridge". Steel, its mining and manufacturing is also very important and characteristic for the city of Siegen and its region. For the photographer this work represents an important step in the process of artistic creativity. 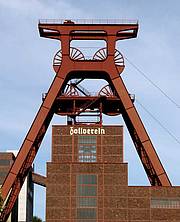 Indeed, for instance, the Capital of Culture in the year 2004, the Italian Genoa, has been the basis for a series of photographs in 2005. Additionally, for Thomas Kellner the minining tower, with the more pragmatic name shaft 12, reflects as an important monument not only the former coal mine but also the whole region of Ruhr.

Founded in 1847, the Zollverein mine, until its closure in 1986, has got a long history as a coal mine in the Ruhr region. After its closure it became a protected monument. In the relatively short period of time until this day, the former mine became the cultural center of the region. And even the UNESCO recognized its importance and took the mine and its premises in 2001 to the list of cultural and natural heritage of the world. The coal mine has got a historical importance and is guarded in present time.

To take pictures on the premises you need a photo license by the Foundation Zollverein. Such an approval is subject to many conditions. For example there is an image charge and a restriction on copyrights of pictures. For Thomas Kellner such an incision in his rights as an artist was not sustainable. Because of this he decided to photograph from a viewpoint that is situated outside of the premises. From this point of view everybody has got the right to take pictures without any licensing requirements and orders. The results of this artistic and unfortunately bureaucratic process are artistic works, which are more then impressive. 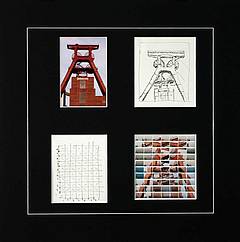 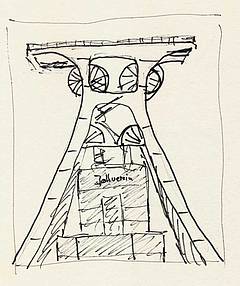 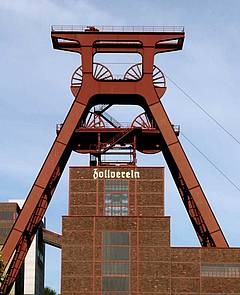 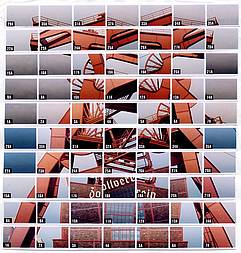 installation at Studio Friedrichstrasse "work in progress - Zeche Zollverein", including emails, contracts and rights from the Foundation Zollverein